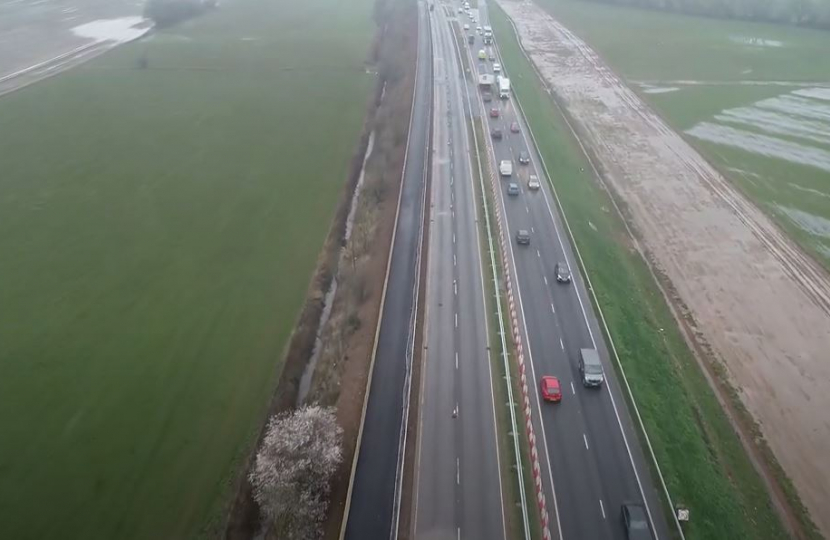 Although Worcestershire County Council is yet to declare the newly-dualled highway open, motorists will soon see the full benefit of the works which will reduce congestion in and around Worcester.

As well as the improvements for motorists made as part of this scheme, three new bridges and an underpass for pedestrians and cyclists have been constructed as part of the strategy to improve access to active travel around Worcester.

Due to the sheer size of the project, construction has taken places in phases, with phase 4 has been enabling the final section of road from Powick roundabout across Carrington Bridge to the Ketch to be dualled, completing the entire stretch of carriageway to and from Junction 7 of the M5.

Robin made a point of bringing together Worcester, Wychavon and Malvern Hills councils and Worcestershire County Council to show a unified front in pressing the case for the Southern Link Road. He was one of the first people to sign a petition in 2014 calling on government and local councils to provide the funding for the project;* he invited Ministers to the city to see the need for the project; and he used parliamentary time to press for the case for the works, which eventually led to the necessary funding commitment in 2017.

Witnessing the images of the first cars using the link road, Robin said:

“The Southern Link is the single biggest transport infrastructure project in the history of Worcestershire County Council and I am glad that it will soon be completed at last. This road was one of the busiest in Worcestershire and I have been determined to see it improved to remove barriers to economic growth. That is why I made a point of inviting the former Secretary of State for Transport, Patrick McLoughlin, who joined me to see for himself the problems caused by bottlenecks and long delays.

“In 2015 I secured a debate on the dualling of the road where I told the then-Minister of State for Transport of my own experiences sitting on the Carrington Bridge with traffic at a standstill. With that route overwhelmed daily, this had a knock-on effect for the city centre, to the detriment of local people and businesses.

“I was, of course, delighted when his successor announced in October 2017 that the £54.5 million of central government money needed to complete the final phase of this project would be made available.

“I have previously argued that the problems caused by traffic in this area has been damaging enough to keep Worcester off the top spot of best cities in the country to live. I now look forward to seeing the benefits the new road can bring.”

Worcester parade is a celebration of pride across Worcestershire

Revellers took to the streets of Worcester today to celebrate the 2022 Worcestershire Pride March. The march has taken place annually since 2017, but was cancelled in 2020 and 2021 due to the Covid pandemic.