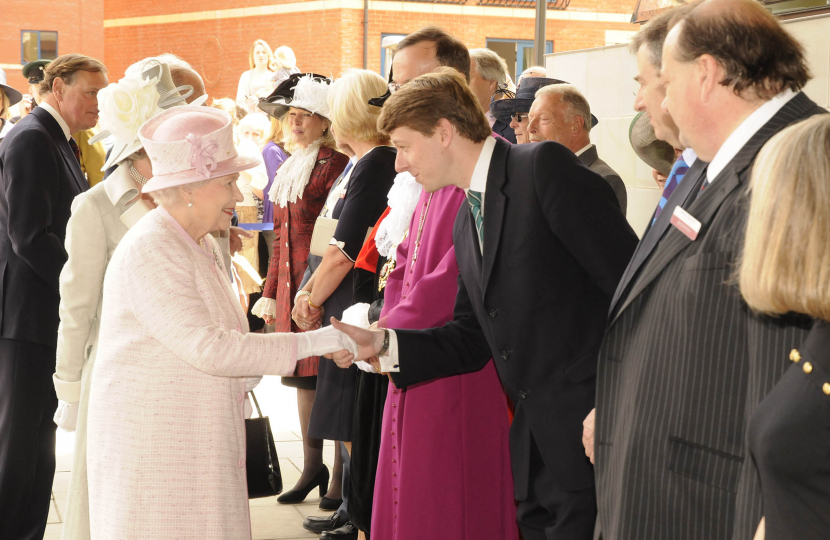 As the United Kingdom and Commonwealth countries around the world celebrated the Platinum Jubilee of Her Majesty Queen Elizabeth II, Worcester MP Robin Walker joined those thanking her for seventy years of service to the country.

Her Majesty has visited the Faithful City a number of times during her reign, most recently in 2012 when the late Duke of Edinburgh joined the Queen as she visited to open the Hive and unveil a plaque at Worcester Cathedral.

Worcester MP Robin Walker met the Queen when she visited Worcester. He said:

"I know I speak on behalf of the people of Worcester when I offer my heartfelt congratulations to Her Majesty, Queen Elizabeth II, on her Platinum Jubilee.

"The Platinum Jubilee is a historic achievement and a reminder of what an extraordinary life The Queen has led. She has been, and continues to be, a dignified and hardworking figurehead to the nation.

"We have been proud to host Her Majesty in the past and every time she has visited she has drawn huge and adoring audiences. I wish her all the best for her weekend of celebrations and long into the future."

University of Worcester presented with levelling up award

The University of Worcester was recognised at the Purpose Coalition's 2022 Levelling Up University Awards. Worcester MP Robin Walker has congratulated the university, saying the award demonstrates why young people should choose Worcester for their Higher Education.