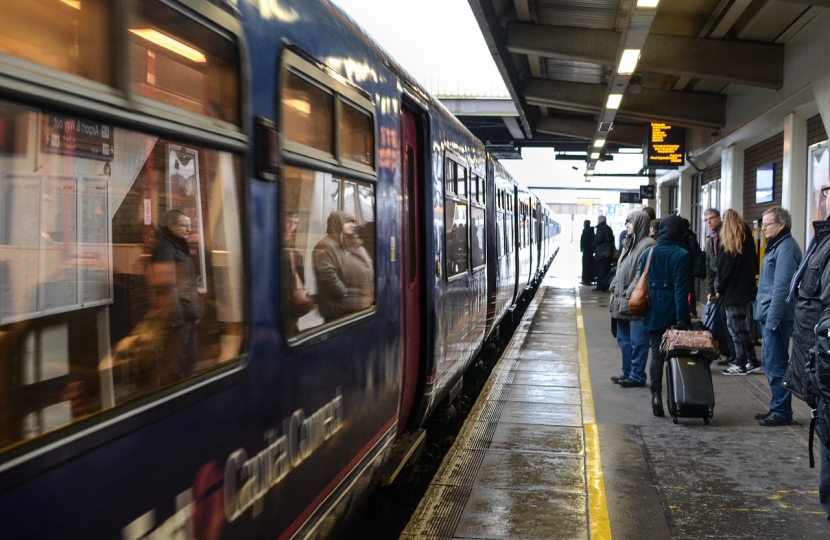 Britain is set to create a new public railway operator called Great British Railways (GBR) in what has been described as the biggest rail reform in twenty five years. Worcester MP Robin Walker has welcomed the move, arguing it has the potential to provide much-needed improvements for his constituents.

Numerous companies have been charged with providing rail services around Britain following the privatisation of British Rail from 1994-1997. Since then passengers have noted confusion about booking and fares, a lack of accountability for poor service, and a spiralling costs. In Robin’s long campaign to upgrade Worcester’s rail services to both London and Birmingham and to get the new Parkway Station for the County, he has had to conduct multiple different meetings with different rail companies, Network Rail and the DFT. The new set up should allow for better accountability to local councils, MPs and regional mayors and the Transport secretary has promised a greater say for towns and cities in the way that Railways work.

Transport Secretary Grant Shapps made clear that the introduction of GBR won’t see a return to the bad old days of British Rail.

The first change passengers will notice will be flexible season tickets from June which will cater to the significant change in working patterns as a result of the pandemic, including many people now working from home more regularly. The flexible season tickets will offer travel on eight days in a 28-day period. The government also said it would eradicate uncomfortable “ironing-board seating”, and make efforts to ensure fewer repetitious and annoying pre-recorded announcements on services.

In the longer term passengers will note a more modern look and feel to the rail network, with train travel becoming cleaner and greener for both freight and commuter travel. It is hoped that GBR will also provide a single organisation that passengers can complain to in the event of problems and failures in the provision of service can hold train operators to account.

Since he was first elected in 2010 Robin has pressed for more regular services on both the London and Birmingham routes from Worcester and prior to the pandemic he had welcomed improvements to the regularity and journey times on the Cotswold line as well as additional carriages and capacity on the WMR services to Birmingham. The opening of Worcestershire Parkway Station last year was a major breakthrough after years of campaigning by Worcestershire County Council and local MPs but its full potential has yet to be realised.

“This week’s announcement is a very welcome change which should simplify the maze of organisations who are accountable for rail travel in Britain. It will also provide a further chance for the government to level up opportunities for communities like mine.

“I will continue pushing hard to ensure the promise of listening to, and empowering towns and cities like Worcester. We need to ensure that the creation of regional organisations doesn’t mean places like Worcester being neglected in favour of nearby big cities. I know that my Rt. Honourable Friend the Transport Secretary, with a Worcestershire MP on his team in Rachel McLean has the experience, ambition and drive to deliver this aim.

“As we continue to grow our local economy the case for a two hour journey from Worcester to London, and more frequent services to and from the capital, is growing and in GBT we will hopefully have an organisation able to listen to the arguments and with the clout to deliver on this.”

Under the reforms, GBR will own and maintain rail infrastructure and collect and set fares. It will contract private companies to run services under its banner.

Secretary of State for Transport, Grant Shapps said in a letter to MPs:

‘To bring about change on the scale that is needed we will create a new body, Great British Railways, to integrate the railways for the first time in a quarter of a century, owning the infrastructure, collecting most fare revenue, running and planning the network and setting timetables. It will be a single, familiar brand responsible for delivering better value fares, punctual and reliable services and which ends the confusion of the current system.

‘As we build back better from coronavirus we have the chance to do things differently in this country. We are a Government which profoundly believes in the future of the railway and Great British Railways will help to secure its recovery. By ending the fragmentation, increasing accountability, making journeys easier and more comfortable, and by putting passengers first we can ensure that the system thrives for decades to come, and of course, that the trains really do run on time.’

I was proud to announce £55 million of government funding approved for the upgrade of Southern Link Road as well as the full dualling of the Carrington Bridge which will help improve everyday journeys in and around Worcester, easing traffic for local people in Worcestershire and Herefordshire, as