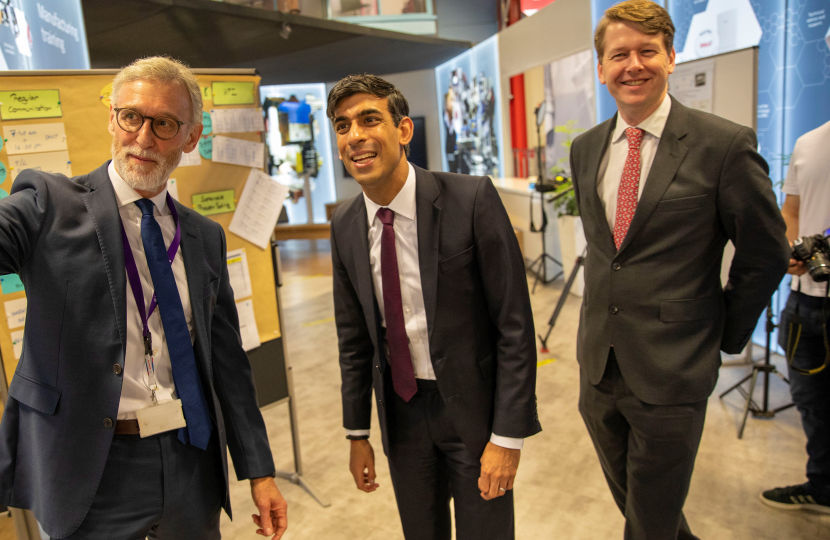 Worcester MP Robin Walker has welcomed the formal appointment of Rishi Sunak as Prime Minister, following a meeting with His Majesty the King. Robin supported Mr Sunak in the leadership contest three months ago and was one of the first MPs to sign his nomination papers this week.

The historic appointment makes Rishi Britain’s first Prime Minister from an ethnic minority background since Benjamin Disraeli whose second term ended in 1880. It comes after a short leadership campaign in which Rishi Sunak, the former Chancellor, was the only candidate to receive more than 100 nominations and gained the support of more than half the Parliamentary party. Both Boris Johnson and Penny Mordaunt who had appeared to be in contention withdrew their candidacy after it became apparent that they would not be able to command the support of a majority of MPs in the party, and both have urged their supporters to get behind the new Prime Minister and focus on delivery.

Robin supported Rishi because he believed his focus on tackling inflation and helping the most vulnerable in society were the right priorities for the government. During the campaign, he pointed to Rishi’s record as Chancellor delivering the furlough scheme during the covid pandemic. During the last leadership campaign Rishi had argued against unfunded tax cuts, instead prioritising bringing inflation under control and averting the risk of an interest rate rise. These warnings were unheeded at the time, but Robin believes subsequent events have proven them correct. Yesterday, following news that Rishi would be the only candidate to go forward with more than one hundred nominations from colleagues, the share price of the FTSE 100 Index rose, the pound strengthened and long term expectations for interest rates improved.

As the newly elected leader of the party Rishi spoke to MPs yesterday (Monday 24th November) the backbench 1922 committee to gave thanks to his predecessors and fellow potential candidates for their public service, urging all MPs to work together in the national interest. He also promised to deliver on the commitments made in the party’s 2019 manifesto which led to the Conservatives achieving the biggest vote share for any party in a General Election since 1979. Robin previously used last debate in Parliament before Liz Truss announced her resignation to urge the party to stick to this manifesto and has welcomed Rishi’s renewed focus on those commitments.

“I have long been convinced that we need someone of Rishi Sunak’s calibre to lead our party and the country. He has experience of some of the toughest periods of Government when he stepped in as Chancellor to create the furlough scheme that protected so many jobs and livelihoods and he is a calm and authoritative figure who listens to colleagues and understands the markets. Most importantly for me his is someone who has shown he understands the importance of balancing efficiency with compassion.”

“I was encouraged to hear Rishi speaking immediately after his election of bringing the party together and using the full range of talent in the party to deliver on our 2019 manifesto. He played a crucial role in drafting that and it is right that he should work with all of us to deliver on it. I know that my constituents want to see a serious government focused on helping with the cost of living, growing our economy and protecting their jobs and livelihoods. I will do all I can to support Rishi Sunak as our Prime Minister in delivering a stronger economy and tackling inflation.”

“I well remember when Rishi Sunak came to Worcester in 2020 and met workers on the factory floor at Worcester Bosch, he was down to earth, engaging and interested to hear what everyone had to say. Under Rishi’s watch as Chancellor the Towns Fund and the Future Hight Streets Fund were launched both of which have directly benefited our city bringing millions of pounds of investment into regeneration here in Worcester. I was honoured to play a small part in his successful campaign and proud to nominate him as the first child of immigrants to become our Prime Minister.”

£19.6 million of government investment has the potential to transform Worcester | Robin Walker (walker4worcester.com)