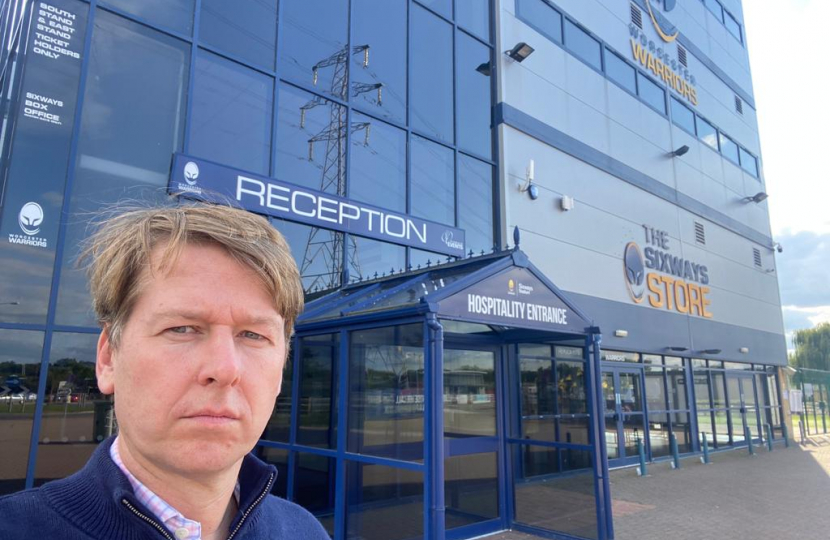 A parliamentary inquiry into the financial troubles faced by Worcester Warriors took place today following a request by local MP Robin Walker. The Digital, Culture, Media, and Sport (DCMS) Select Committee looked into how Worcester Warriors came to be placed into administration and the impact on the community.

The Chair concluded that an investigation into fraud should be launched and criticised the RFU and PRL for having presided over a failure of governance at the club.

Robin gave evidence about the impact the financial decline of Warriors has had on residents in his Worcester constituency alongside Carol Hart, CEO of the Worcester Warriors Community Foundation. Both argued that the Warriors’ P share – the financial stake clubs have in the Gallagher Premiership and its television rights – is a vital lifeline for ensuring the club has a future in top-flight rugby. Robin handed the committee the letter he drafted, signed by six local MPs and councillors and current and former Mayors of Worcester as well as players at the club and the former heads of department urging PRL to let the club keep its P share.

Robin wrote to the Chairman of the DCMS Select Committee, Julian Knight MP, in early October to request that the committee look into what went wrong at the club. Since then Wasps have also fallen into administration, raising questions about the financial sustainability of English professional rugby.

Speaking to the committee on the impact of the Warriors’ financial collapse Robin said:

“It is much more than just a professional rugby club. It is something which is valued at every level of the community… One of the problems that we faced when we saw that the Warriors were under threat was that everything associated with the club was also under threat at that moment. The Academy, all the amateur activities that has are supported by Worcester Rugby Football Club that has been around for 150 years, the fantastic work of the community foundation which supports thousands of people not just in Worcestershire but around Herefordshire and Birmingham as well was under an unknown level of threat because of a risk that the assets would be broken up and the land lost.”

“So while the professional club is at the pinnacle of that mountain and hugely valued… it is only one part of what is at risk here. In our schools you see imagery around the Warriors all the way from Primary to some of the relationships that Carol and her team built up with the alternative provision sector and the Aspire academy and so it was something which was deeply felt.”

Both Robin and Carol Hart hailed the legacy of Cecil Duckworth whose work for the club saw Warriors rise from sixth-tier Midlands regional leagues to the top tier in two decades. Cecil’s legacy extensive legacy in the city began with the creation of Worcester Engineering Co, the firm behind the boiler system now produced by the renowned Worcester Bosch. The Warriors’ quick rise through six divisions took place under Cecil’s leadership at the club, and both Robin and Carol highlighted the value of his work to the club’s success.

Carol told the committee: “Cecil Duckworth spent 20 years building financial value into our P share and if we lose the P share, the club will probably not survive under any ownership.

“That is my personal opinion. I think we owe it to Cecil’s legacy and the legacy of the Allen family to make sure the P share is protected.”

Many fans have expressed anger at the club’s owners who they see as responsible for the financial trouble that has befallen the club. In concluding the meeting chairman Julian Knight took aim at Colin Goldring in particular, saying he would not only write to the Serious Fraud Office concerning Mr Goldring but also to John Campion, Police & Crime Commissioner for West Mercia.

During the session that followed the Chairman of the Committee, Julian Knight was highly critical of the RFU and PRL for not spotting the signs of trouble earlier when payroll was missed and the owners repeatedly missed deadlines. He described them as being asleep at the wheel and accused them of presiding over “failure on an epic scale”. Members of the Committee also pressed PRL to allow the Warriors and Wasps to keep their P Share, describing it as “the right thing to do.”

Robin has agreed to meet RFU chairman Bill Sweeney to discuss the club’s future, including what can be done to ensure that any future owners of the Warriors keep the best interests of the club at heart.

Speaking after the hearing, he said

“I am glad that the committee gave proper and robust scrutiny to the dreadful situation at Sixways and the lack of transparency and accountability that got us there. Its right that lessons need to be learned from this and we must make sure no club is ever put into this situation again. I am glad that the chairman of the committee is calling as I have for further investigations and I hope that the committee will ensure that the RFU and PRL introduce a proper fit and proper person test, monitoring of financial performance and a more transparent regime for rugby governance in the future. Carol Hart did a brilliant job of speaking up for the staff at the Warriors and I hope that between us we also made the case for fans and players who have been so badly let down.”
“A lot has improved since I first raised the plight of the Warriors in Parliament. The appointment of administrators has taken the club and its assets out of the hands of directors who should never have been in charge of it. The inclusion of the land in this process was by no means a certainty when it started but their complex web of companies has been unravelled and the land taken into the administration. With the help of the RFU the academy has been saved and the Worcester Warrior’s women have been given a license to play independently. Rugby will be resuming at Sixways as soon as this weekend and hopefully it will be followed by professional championship rugby once negotiations with the preferred bidder have been concluded. I want to make sure the Warriors can be back at Sixways and playing in the premiership again as soon as possible so I urge the RFU and PRL to listen to what they have been told, make the necessary changes and ensure the club has a chance not just to return to professional rugby under fit and proper directors but to thrive.”

For a more details of the hearing see: